How First Presbyterian Church was Started 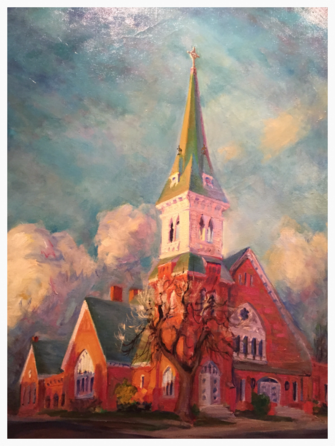 10 am Worship Every Sunday

​Where Pandemonium Seemed to Reign Joseph Bachman records the strange and mysterious beginnings of what was to become Bismarck's First Presbyterian Church in his History of the first 75 Years. This meeting he indicates was held on June 15, 1873, in a tent erected by George Crummey. The service was conducted by the Reverend I. O. Sloan, who came to Bismarck by construction train from Minnesota. Sloan himself says:

"We came to Bismarck on Friday, just before dark. A low row of shanties and tents on the street facing the track met our view. The most of these were saloons and resorts for gambling. We heard profanity on every hand and there was little to be seen or heard that would encourage a minister to remain and labor where pandemonium seemed to reign.

The next day we mingled with people and talked with them about a minister and a church. All seemed pleased at the prospect and promised to aid. On Sunday I preached in a large tent erected on Front St., to be used for a saloon. It was filled with attentive people. In the afternoon I held a service at Fort Lincoln, which was then an infantry post. General Custer had not yet arrived.

So began one of the oldest churches of any denomination in North Dakota. Perhaps only Presbyterians, equipped as they are by nature and nurture, could bring decency and order to a place "where pandemonium seemed to reign."